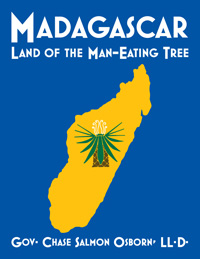 Madagascar: Land of the Man-Eating Tree by Chase Osborn presents the facts, myths, and legends of Madagascar as viewed by a former governor of Michigan. Learn about cultures and creatures, pirates and castaways, and the interesting scientific and political beliefs of a highly educated and well traveled author of the 1920s.

Originally published in 1924, this unabridged edition retains every word of the first printing in reset text, along with all the original maps and photos.

Madagascar: Land of the Man-Eating Tree is now available in PDF from DriveThruRPG.com, e23.sjgames.com, and Paizo.com.

Enjoy our free PDF sampler of Madagascar: Land of the Man-Eating Tree.

Our planned releases include:

Octocalypse! A Zeppelin Age Adventure
Will Land Octopi doom man's dominion of the earth? Let your players determine the answer through this role playing game adventure! The DECO game system encourages streamlined fun: creating characters or anything they encounter is a snap, and resolving the players' actions is even faster. Octocalypse! includes everything you need to play (except dice), including all the rules for character, creature, and contraption creation, character sheets, and gear cards. Also included is "The Octopus Cycle" originally published in 1927, which served as an inspiration for the adventure.

Zeppelins Over Hollywoodland! A Zeppelin Age Adventure
The characters join the world as it converges on Los Angeles for the Summer Olympics of 1932, but discover strange goings-on that are not all fun and games.

If you purchased the original version of Airship Troopers, thanks! We'll provide a patch kit here as a free download so that you do not need to buy the new version. If you got it from Drive Thru RPG or RPG Now, you'll get a copy of the revised version automatically.